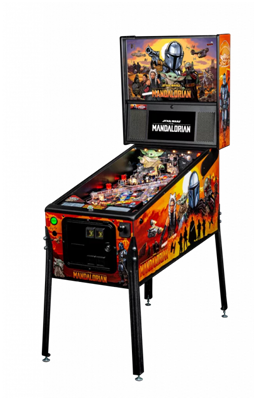 May 4th came and went and the Star Wars memes were, as usual, on point. Humor aside, however, Stern Pinball surprised us after the fact by announcing their brand new upcoming line of pinball machines, this time inspired by the hit Disney+ series, The Mandalorian.

As many of you may be aware by now, The Mandalorian is one of the shows that premiered alongside the launch of Disney’s new (at the time) streaming service, and is arguably the main reason many users subscribed to the platform in the first place. While the repertoire of shows and films on the service have expanded since its launch to include both pre-existing and original programming, The Mandalorian is still the reason why many subscribed initially, and remain so to this day, a fact that was further cemented by the success of season 2 in late 2020.

Suffice it to say, The Mandalorian is a pretty good show, so the natural course is for the merchandising to catch up across a variety of product lines. Let’s take a look at what Stern Pinball has in store for us!

As is the case with most Stern Pinball releases, The Mandalorian will come in three different versions; Pro, Premium, and Limited Edition. The first is the base model, featuring the least number of features, while the other two offer superior aspects in both the aesthetics as well as in the inner workings of the machine itself. 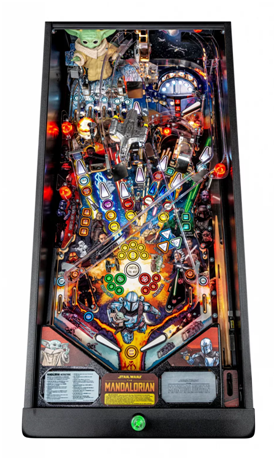 The Pro edition comes equipped with the standard two flippers at the bottom, while adding a third placed in the upper right corner to control the action on a mini-playfield. Premium & LE models come with four flippers and motorize the mini-playfield for additional excitement. The base version also comes with plastic ramps instead of the wire metal ones that are found in the other two editions. However, all three versions come with the exquisite artworks from the talented hand of Randy Martinez, a statue of Grogu (Baby Yoda!), a Razor Crest Ship toy, a screen and speakers setup that show scenes from the series, as well as play audio clips voiced by Carl Weathers (who plays Greef Karga in the show).

The Grogu statue is particularly noteworthy here since, in the Beskar LE and Premium versions, it features a magnet that simulates his force powers and can alter the movement of the ball when fighting on the mini playfield. And speaking of limited features, the LE version offers a myriad of other unique aspects including, and we quote: “an exclusive full color mirrored backglass inspired by Beskar armor, iconic custom cabinet artwork, custom high gloss powder-coated pinball armor, a custom designer autographed bottom arch, exclusive inside art blades, upgraded audio system, anti-reflection pinball playfield glass, shaker motor, a sequentially numbered plaque, and Certificate of Authenticity.”

There will only be 750 Beskar LE versions manufactured, so you need to be quick if you want to get your hands on one. These will sell at a MSRP of $9,199, while the Pro and Premium versions will go for $6,199 and $7,799, respectively. You can check on our pricing by contacting our sales department (1.800.550.0090 or [email protected]) and can read up on more details by visiting our detailed product pages for the Pro Model and Premium/LE models.

May the force be with you!