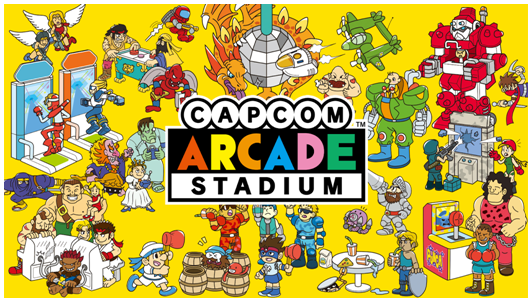 Today’s news piece is short but promising as it’s about a game that’s all but confirmed to be coming to the West. We’re talking about none other than Capcom Arcade 2nd Stadium, the sequel to the popular Capcom Arcade Stadium, which we’ve covered on the blog in the past and that offers 32 classic titles from the beloved game devs, promising countless hours of fun with games like Ghosts n’ Goblins, Bionic Commando, various iterations of Street Fighter II, and many more, all of which spanned Capcom’s legacy from 1984 to 2001.

The sequel, which hasn’t been officially announced to be releasing worldwide by the company just yet, has just received its “Age 15+” rating by the Game Rating Administration Committee of Korea, specifically for the PC platform. Compared to the previous iteration, this one seems to be featuring more mature or teen-oriented games, considering that the first Capcom Arcade Stadium had a 12+ age rating. However, according to the game’s entry on the Administration’s website, this higher rating is due to “female body exposure”, and “depiction of bodily harm”, specifically in the collection’s fighting games.

Nevertheless, this PC rating could imply that it might be releasing for the same platforms as its predecessor, which also includes PlayStation 4, Xbox One, and Switch. Further, if this is the case, it’s also safe to assume that it would be released for current-gen consoles like the PlayStation 5 and Xbox Series X, though nothing’s for certain at this very moment.

In terms of games, the only information that we’ve managed to dig up is that not only did the base game receive a rating, but also an addon pack called “Capcom Arcade 2nd Stadium Bundle #1”. If the collection’s history has taught us something, it’s that this new release will probably follow the same model as the first one, launching with only a single or a couple of games in the base version, with the rest of its offerings coming in the form of purchasable DLC. And while the games in the first Capcom Arcade Stadium came in three separate packs initially, the company eventually made them available individually late last year, with the release of Ghosts n’ Goblins as its first standalone title.

As matters stand right now, it’s hard to predict what’s coming in this new entry. But what’s probably true is that it’ll offer tons of hours of fun with more of our favorite Capcom classics, and with all the quality of life features from the first, including online capabilities, save states, rewind features, and a ton of graphical filters and effects to spruce up your games. And as for the list of games and other possible new features, we’ll just have to wait until it releases later on.

‘The House of the Dead: Remake’ Gets a Physical Edition Reveal on Switch