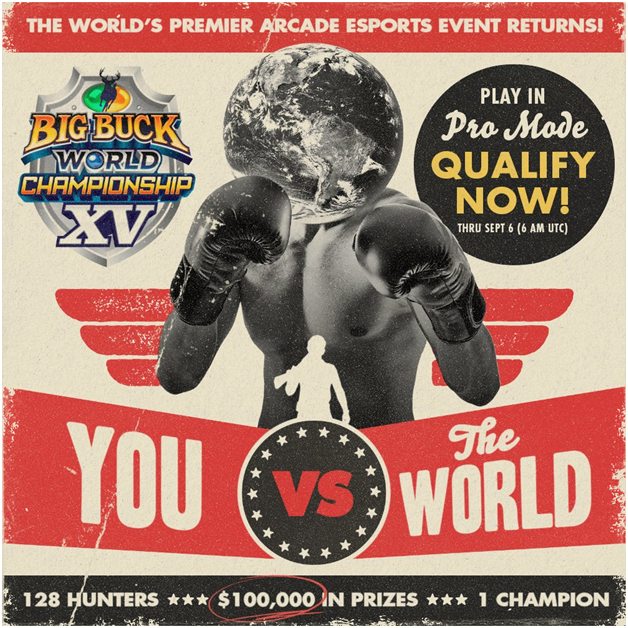 With the qualifiers well underway and joinable on any official Big Buck Hunter Reloaded machine connected to the game’s network, the dates and location for the upcoming Big Buck Hunter Championship XV have now been announced by the organizers on their official Facebook page and other social media platforms. The tournament in question is to be held this October 14th and 15th at Joe’s Live in Rosemont, Illinois. This time around, while the main feature will obviously be the Big Buck tournament, there will also be other games available, in order to make the event more family-friendly.

For those who are unfamiliar with it, Big Buck Hunter is the popular arcade game franchise developed by Play Mechanix for arcades & bars. The objective is to use the attached light-gun to shoot at the bucks & critters for points, while avoiding shooting the does. Throughout the years, there have been a few game mode additions, as well as new hunting venues to choose from. Similarly, features like online leaderboards through social media networks have also been an important addition, especially for the competitive gaming crowd.

Despite being more of a casual arcade game to play while drinking at your local watering hole, Big Buck Hunter has amassed a large following of dedicated gamers throughout its lifetime, coalescing into many different tournaments across the world, with the largest and most important being the Big Buck Hunter Championship held in the United States. This tournament has players from all over the world play on officially-licensed machines and try their hands at setting up the highest scores possible, with the top 64 qualifying for the actual tournament, and an extra 64 players also qualifying as wildcards.

When it comes to the 15th installment of the Big Buck Championship, and in the spirit of making the October event appeal to a wider crowd, as well as make it more family-friendly, there will be other Raw Thrills games present at the venue, while the tournament itself will be held in a separate section dedicated exclusively to it. In addition to this, alcoholic beverages will be limited to certain sections of the venue.

If you want to learn more about the Big Buck Hunter Championship, feel free to check out this trailer that the organizers shared when they revealed the tournament dates:

Furthermore, we invite you to check out the official Big Buck Hunter website to find more information about the tournament itself, as well as how to qualify and participate, should you be interested.