For the past few years, Arcade1Up has carved itself a reputation for being one of the prime producers and manufacturers of affordable retro arcade cabinets, boasting all the goodness and fun of the games we grew up playing in our local arcade centers, but with a slightly smaller profile and a much lower price tag. The point here being to give users an alternative to add one or more of these machines to their gaming rooms, without breaking the bank, and without having to sacrifice Grandma’s beloved antique furniture to make space for the cabinets.

However, despite the smaller cabinets being their main offering, Arcade1Up also develops and maintains another interesting product, the Infinity Game Table, which is exactly as it sounds: It’s a coffee table with a large touchscreen, on which you can play a variety of games, mainly party and board games, perfect for sharing some great times with friends. These titles include over seventy games like Chess, Battleship, Clue, Chutes and Ladders, Solitaire, and Yahtzee, among others, and with many more on the way. Speaking of which, the newest title to join the fray for the awesome gaming table is Batman Monopoly.

Now, Monopoly has been a one-of-a-kind board game throughout the years, responsible for bringing joy to the scant few who actually manage to win a match, as well as break up friendships with those that went bankrupt and lost in the process. Jokes aside, this board game is some of the most fun you can have with friends and has become popular enough to warrant a wide variety of versions. Honestly, Monopoly might hold some sort of record for offering the most crossovers with other franchises in a variety of types of media.

The Batman Monopoly version offers much as what you’d expect from this board game. In fact, it’s exactly the same, except with the properties and the board itself having a coat of paint reminiscent of the Dark Knight, his home turf of Gotham City, and the many villains that constantly roam in it cursing chaos. Also, instead of the player chips, we have logos of Batman and other characters as the icons that players can choose as their “characters”. And instead of hotels and residences, players can place Wayne Towers and Bat Signals to increase the value of their properties. And finally, the “Chance” and “Community Chest” events are all appropriately Batman-themed for maximum immersion. 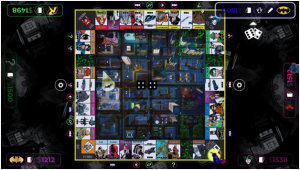 Here are some key features of this Batman Monopoly game, as featured on its product page:

The Batman Monopoly board game is available for download on any Infinity Game Table, and you can order the table itself directly on Arcade1Up’s website, which goes for $899.99 for the 32” version. The table reportedly also comes in a 24” presentation, though we can’t find it listed on the product page anywhere. 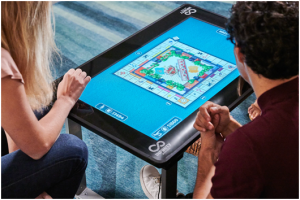 Getting Good - Arkanoid: Revenge of Doh